How did I get so lucky? I got a real life hero for a dad!

Your grandson told me recently that he picked me to be his mom before he was born. That boy has more wisdom and truth in his heart than any child I’ve ever met. But what he said and how he said it struck me like a sharp slap to the face. Time stopped for a few seconds after he made that statement, because as magical as it sounded, he said it with such conviction and without hesitation, I believed him. And he was right.

He chose me. And dad, I chose you.

You hide your cape well. You mask it under your humble insecurities, under the “what-ifs?” of your own life and under your “shouldas, couldas, and wouldas.” You’re able to blend in with others with your chameleon superpower. You know, the one where you look and talk like everyone else even though you’re unlike anyone at all, because you’re Superman. 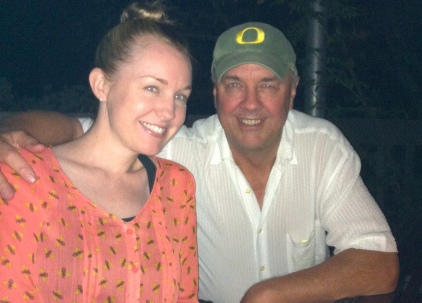 When I was a young child, I used to think Superman was perfect. I thought you knew it all and had it all figured out. As I grew older, I found out that Superman makes mistakes too, because if you didn’t, you wouldn’t portray human qualities. But what I’ve never told you Superman is that I figured out your secret a long time ago. You made those mistakes for me to learn from. It was your way of being human even though I always knew you were really a superhero. And I thank you for that, because although I learned so much from what you taught me while in your Superman costume, I learned the most from you while in your human form.

When I saw you as human, I was able to forgive you for any and all mistakes you had made, which allowed me to forgive myself for my own. Your human form taught me that even though we can be superheroes, we could also fall, and that it was okay. You taught me that I could get back up and your love for me would never lessen. That’s when I realized even Superman isn’t perfect. You have flaws and shortcomings too. You make mistakes and hold regrets, just like a human being. But I still know you’re Superman, so don’t think for one second that you’ve fooled me.

But even though you’re Superman, you still age like the rest. You have to; you can’t be the only man on earth not aging, because then your secret would be out. So with every new year and every new birthday, you continue to be my superhero no matter my own increasing age. You continue to surprise me with your wisdom, and shower me with your love, and for that I am eternally grateful.

I truly am the luckiest girl in the world. I have Superman for a father and you still have no idea I know your secret. And although a day will come when we are separated in this life, I want you to know that I will choose you again in my next one. I will choose you every time. You’re the best father a girl could ever wish for and I love you so much. After all, who wouldn’t want Superman for a daddy?

One Reply to “Dear Superman: To My Daddy on His Birthday”