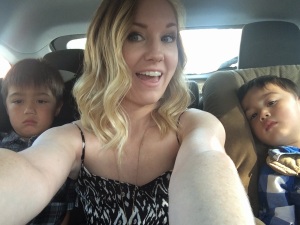 Having a child is a tough job. You know, the whole getting pregnant, staying pregnant, dealing with morning sickness, gaining weight, and enduring the birthing experience are quite taxing on a woman.

Well, we ain’t seen nothing yet.

Once that baby is out and you’re responsible for feeding it, bathing it, and clothing it, it’s like you need four arms just to make sure you both stay alive. But what about when they start speaking? And, yes, I’ll acknowledge the sweet, “I love you,” we get here and there — again, so sweet. But what I’m really talking about are the sass-a-frass mouth-offs your first grader is giving you and now teaching your toddler.

While the rug is being pulled out from under us, and the kids go to town on the verbal abuse, we mothers are scrambling to get our shit together and plot damage control. In doing so, we tend to make a few excuses on our way to figuring it all out. We just hope it’s not too late by the time we do.

Here are a few excuses (for the less-than-acceptable behavior) I’ve heard myself tell over the years in order to save my kid’s image. Oh, and mine too.

But he refuses to go to sleep. I, on the other hand, am exhausted! Can I volunteer to catch some Zs for him?

From a three-hour nap, and if that were me, I’d be dancing on the ceiling in excitement.

3. “He’s going through a transition/phase.”

I told him “no” today more than the allotted times allowed by his standards, and now he’s making me pay.

He wants candy for dinner and is pissed off that I’m not giving in, but I’m entertaining the idea.

He’s been hand-fed his breakfast, given a cardboard box to play in all morning, hand-fed his lunch, allowed to nap for three hours and is currently watching Mickey Mouse Club House while I hand-feed him a snack. Yea, it’s been really rough!

He started the night in his own bed, but then he wouldn’t go back to sleep until he came to my bed. He then proceeded to kick and slap me while I sweated my way through the next six hours of what felt like Fight Night capped off by suffocation — super rough for him. Me, on the other hand, I’m totally fine. Don’t worry about me.

7. “I think he’s coming down with something.”

I have no idea why he’s behaving like a wild beast. But since his nose is running from the last meltdown he just had, we’ll tell people he’s getting sick.

I just got done nursing him back to health for the last two days, which involved sleepless nights and sneezes to the face. So he’s cranky. But I’m doing great!

So why are they called the terrible twos when it’s been going on since the terrible one-and-a-halfs? I’ve got nothing.

In other words, I’m clueless as to why my child is acting like a drunken, erratic mental patient. It couldn’t be because he’s a spoiled brat. I don’t raise those.

The funny thing is, apparently it does get better. It’s been wonderful to have so much support from parents who have told me that “it’s normal,” and that I’ll “miss this time.” It’s been great knowing that I’ll eventually get some relief from making excuses and lying profusely to people about why my child is behaving like the most ungrateful, spoiled monster that ever walked the earth.

Maybe he’s just really dramatic and will be the next Leonardo DiCaprio!

If that’s the case, I’m in for a large paycheck.

Ugh, did I just make another excuse?